Goodreads #1 Best Spy Novel
There are people whose private lives are no more than their cover story.  These people are known as Nonofficial Assets.

Peyton Stone never quit his day job. But it’s his other profession that might just get him killed.

Islamabad. Baghdad. Shanghai. Kazakhstan, Kabul. Langley. For Peyton Stone, that’s a work commute. But his is no normal job. On the surface he’s a world-renowned security expert. But his real occupation is serving as a "nonofficial asset," a contractor working for the CIA when the government needs complete deniability. While advancing American interests globally, Stone discovers that those interests can exact a steep personal price. And when his business partner is murdered in a Shanghai hotel, ominous ghosts from his past return and he’s drawn deeper into the covert maze, on the hunt for a stolen nuclear weapon and the rogue Iranian admiral hell-bent on using it. In Nonofficial Asset: The Iran Affair his skills,  training, tactics, mettle, and allegiance to family and country are all pushed to the limit as he races to prevent nuclear catastrophe.

A captivating international espionage cliffhanger, William Sewell’s new spy thriller is not some fake fantasy conjured by an uninformed novice writer working from his safe, local Starbucks. This is an adroitly told tale of very real and likely scenarios by someone who has been in some, if not most, of these dark bunkers—and lived to tell about it. A 30-year veteran of the clandestine services, William Sewell is a communications security expert by day. But like Peyton Stone, he has another profession. Exploiting his behind-enemy-lines intelligence experience, Sewell infuses the Nonofficial Asset series with an authenticity that can only be gained from real-world experience in the trenches.
________________ 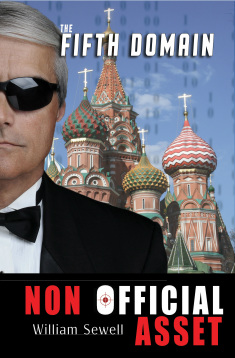 A NASA scientist.  A Russian hacker.  A Secretary of State.  What binds these people together?  That’s the tangled web in which Peyton Stone finds himself.  His day job is: consultant, a world renowned security expert, but his real job is serving as a “nonofficial asset,” a contractor working for the CIA when the Government needs complete deniability.  When a freak explosion at a California utility substation uncovers a connection to a brilliant but angry scientist, Peyton finds himself in Oman, Germany, and Russia piecing together the real story hidden deep in the covert cyber maze, on the hunt for the Russian Mafia genius who would exploit the world’s economy for his own personal gain.  In this latest installment in the Nonofficial Asset series, his skills, training and personal commitment are tested to the limit as he races to stop economic disaster.

Award winning novelist William Sewell has released this second installment of the Nonofficial Asset series, the Peyton Stone novels, a page turner from the start.  In military parlance there are five domains of warfare: land, sea, air, space and cyber.  The newest - cyber - is the scariest, most pervasive and potentially the most deadly.  Terrorists can sit in their homes overseas, thousands of miles away and wreak havoc all around you and you never even see it coming.  In The Fifth Domain, Peyton Stone goes up against a NASA scientist who is in league with a Russian Mafia hacker who holds in the palm of his hand not only the world's safety but also the one person Peyton loves.  In the end he must make hard choices as he fights to save the world from ultimate destruction.


Praise for the Nonofficial Asset series:

"An engrossing international thriller that will keep you turning pages long, long into the night." - Bentley Morriss, Holloway House

"Gripping. Taut. Engaging. Harrowing. William Sewell's new spy  thriller is a captivating international espionage cliffhanger that is sure  to  engage and enthrall readers of every stripe. I couldn't put it down, and I read it on an iPhone! Also, this work is not some fake fantasy conjured by an uninformed, artless, novice writer in his safe, local Starbucks. This is an adroitly told tale of very real and likely scenarios by someone who has obviously been in some, if not most, of these dark bunkers--and lived to tell about it. If you're looking for a great, absorbing read or want to gift one to someone you know who loves them, Nonoffical Asset is the perfect choice. Can't wait for the next one in the series... " - Arthur Shurr, Writer, Playwrite, Author